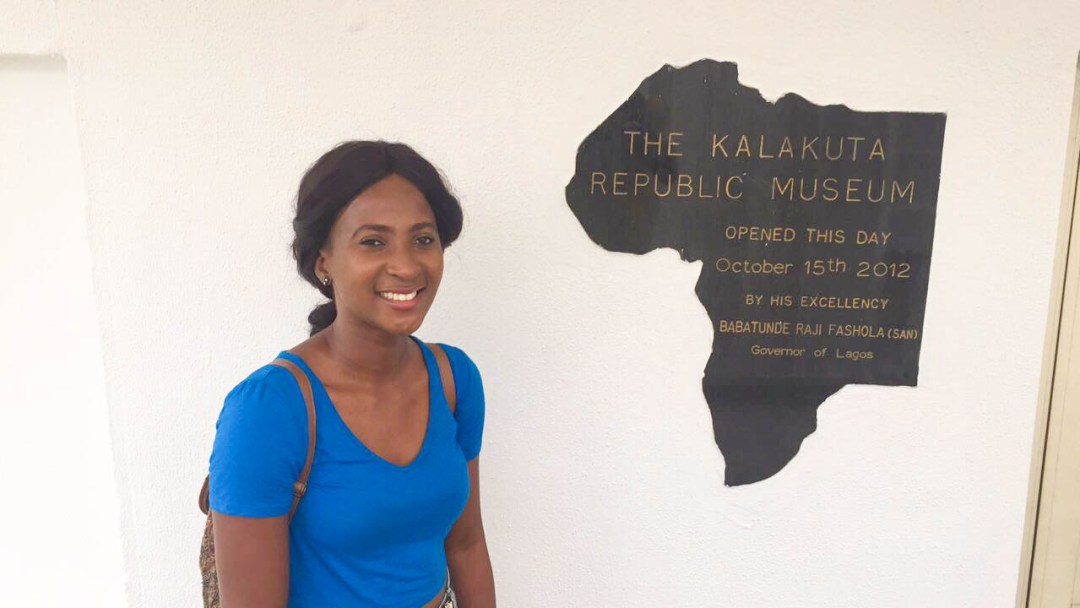 Its no news that last week was the 20th anniversary memorial of the Afrobeat legend and a couple of you guys attended the Felabration event at the New Africa Shrine. I was there on day 4 and blogged about my experience here. However, I did a little digging and decided to check out relics of the life and time of Fela Anikulapo (“He who carries death in his pockets“) Kuti at the kalakuta Museum. After surviving the hellish traffic from the Island to the mainland, I got to the third and last kalakuta which Fela stayed until his death in 1997 only to be told that the museum was closed for renovation. I had come all the way and just couldn’t leave without a load of pictures and some depth. 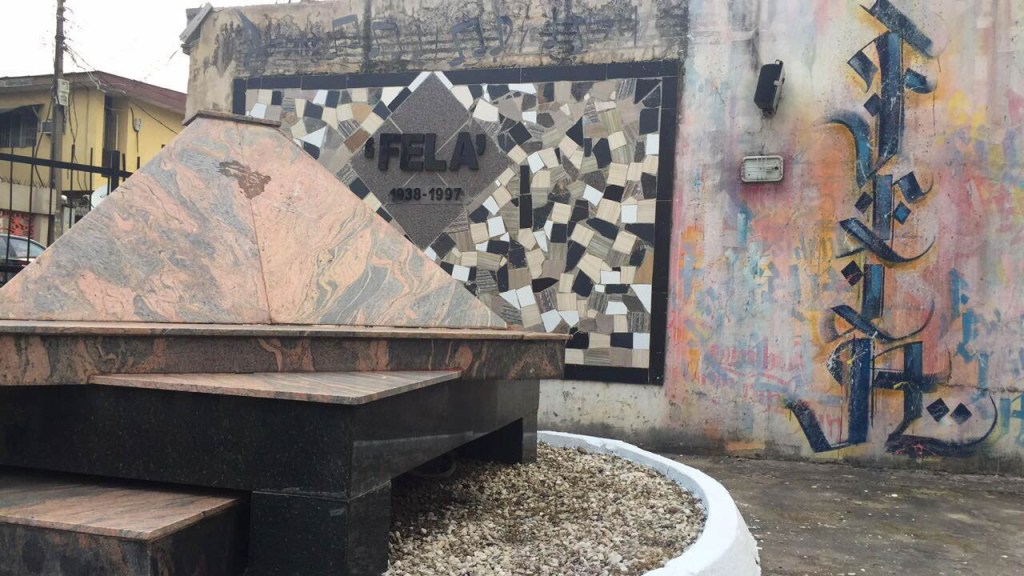 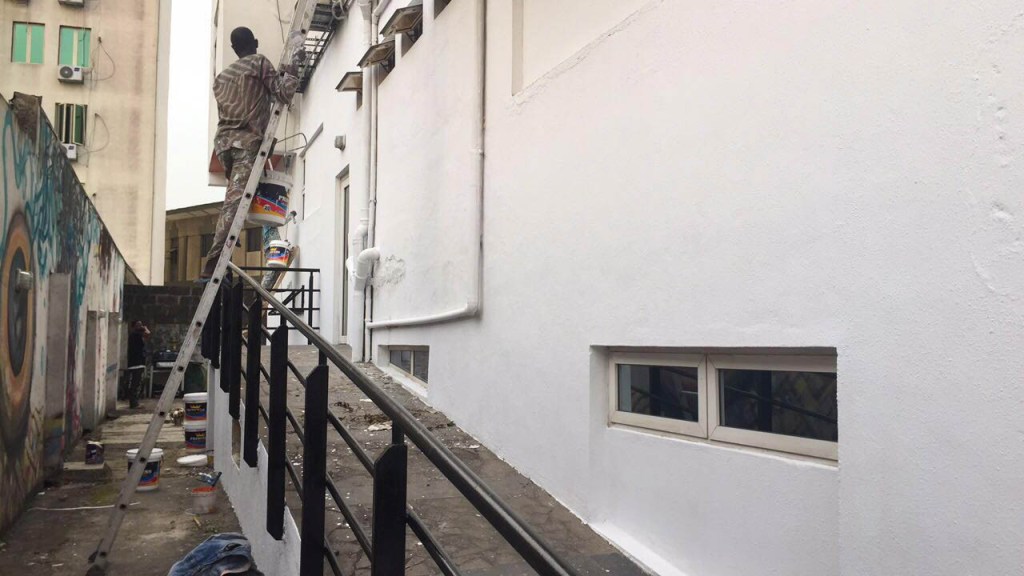 I spoke to the manager who also happened to be the lead curator of the kalakuta museum and I got in 😉 . He gave an excellent narrative of Fela, his uncompromising attitude towards corruption, the depth and meaning of his songs. How he was prosecuted by the then military government, the death of his mum after being thrown down from from a storey building, circumstances that led to his move from the first Kalakuta at Ojuelegba, the second at Ikeja and finally to the current one located at 7 Gbemisola Street Allen Avenue, Ikeja where I stood in awe of the Abami Eda (The mysterious one). The name Kalakuta was derived from a cell in which he was locked during the Military era. 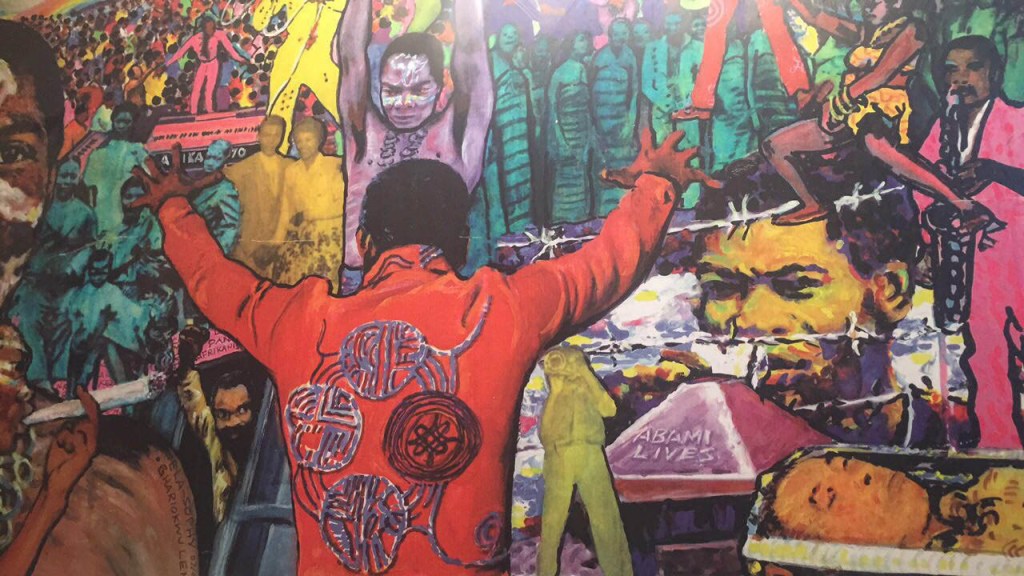 Fela is popularly known to have been a womanizer, however I was told in concise terms that Fela never went chasing after women but the other way around. Pictures of his 27 wives at their wedding, those of his children, mother and other relations were placed in strategic places in the building. Fela also had a lot of albums and a few of the covers are placed hanging one the ground floor. 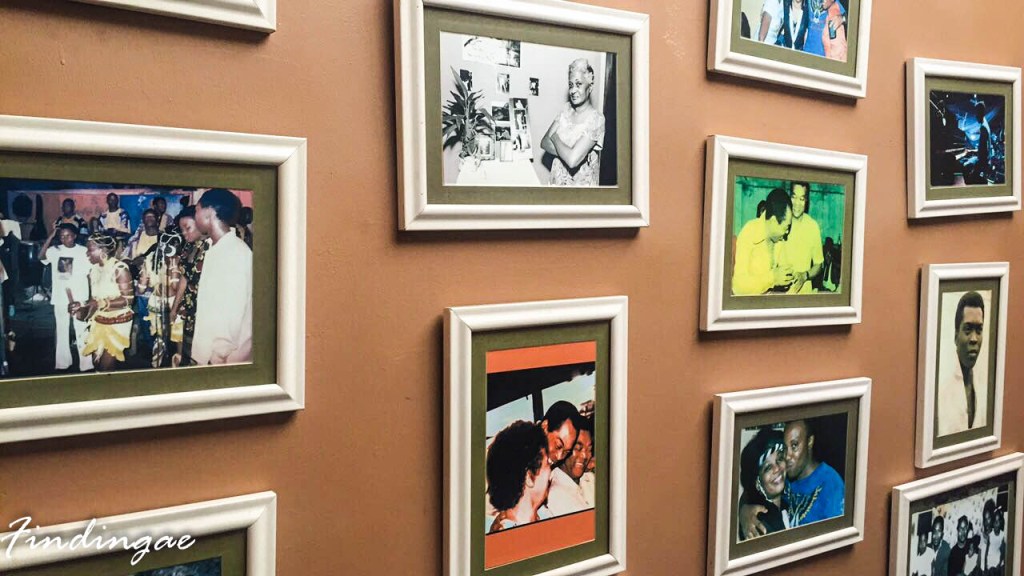 Fela was the pioneer of the Afrobeat genre of music but I was made to understand that he had started out his music career as a Jazz singer but was later influenced by Sandra a member of a group called the Panther Movement who had invited him for a concert in London. Sandra pictured below had expressed disappointment in him after he played jazz, told him of how he ought to be portraying the sufferings of his people back home via his music. This lady was the turning point in Fela’s music career and pretty much shaped him into the legend he is. 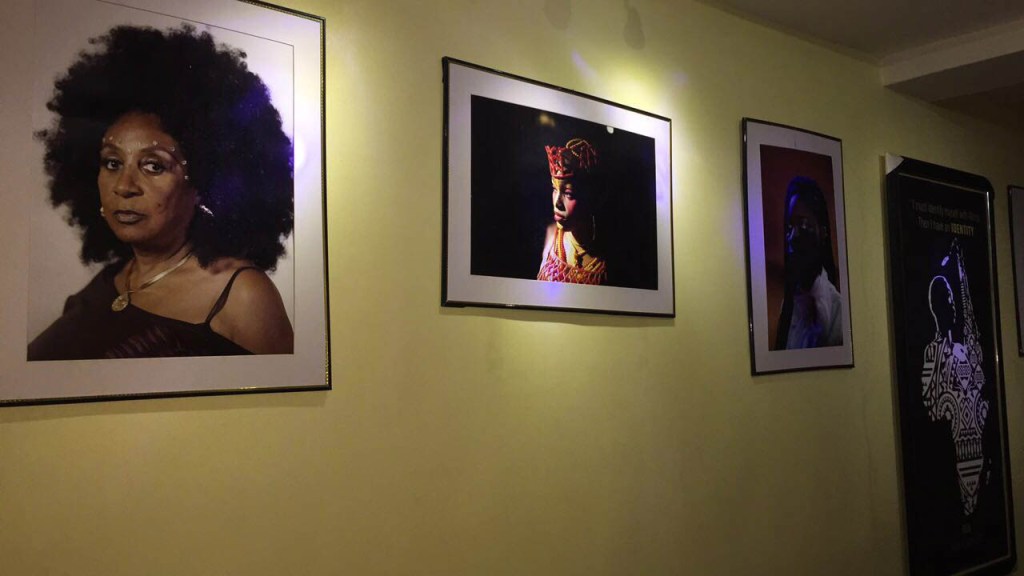 Fela was a multi-instrumentalist and few of his instruments are up for display in the museum. The famous drums which he used to create the record “Beast of no Nation” also stands over 6ft tall in one of the show rooms. 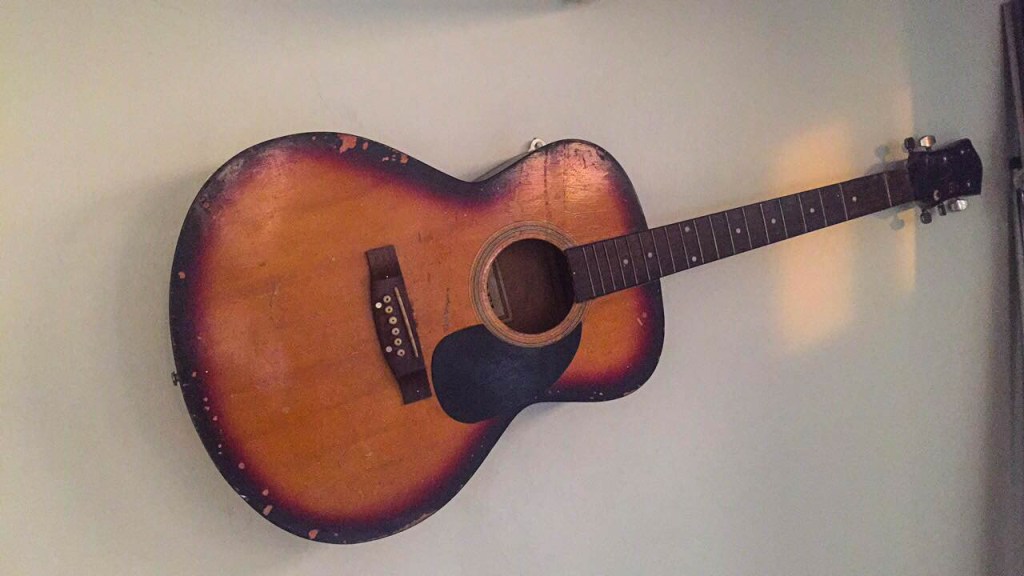 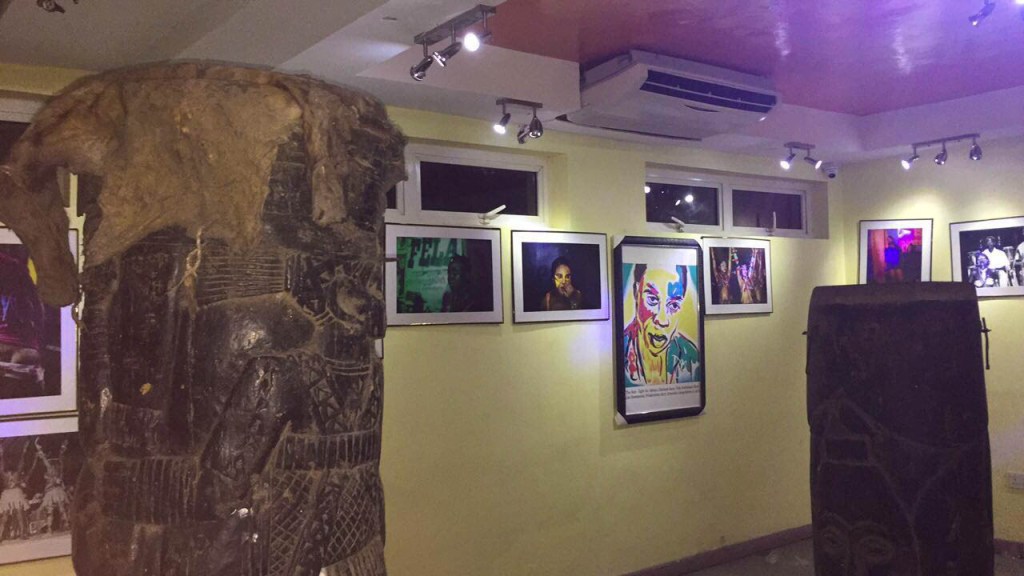 Fela’s room located on the first floor was next up, it houses his personal possessions just the way he left it before his death. He had a sweet tooth and kept chocolates, sweet and other edibles which he never shared in the freezer. I also saw the strong bed which had definitely seen different bouts of sex with about 27 wives 😛 . 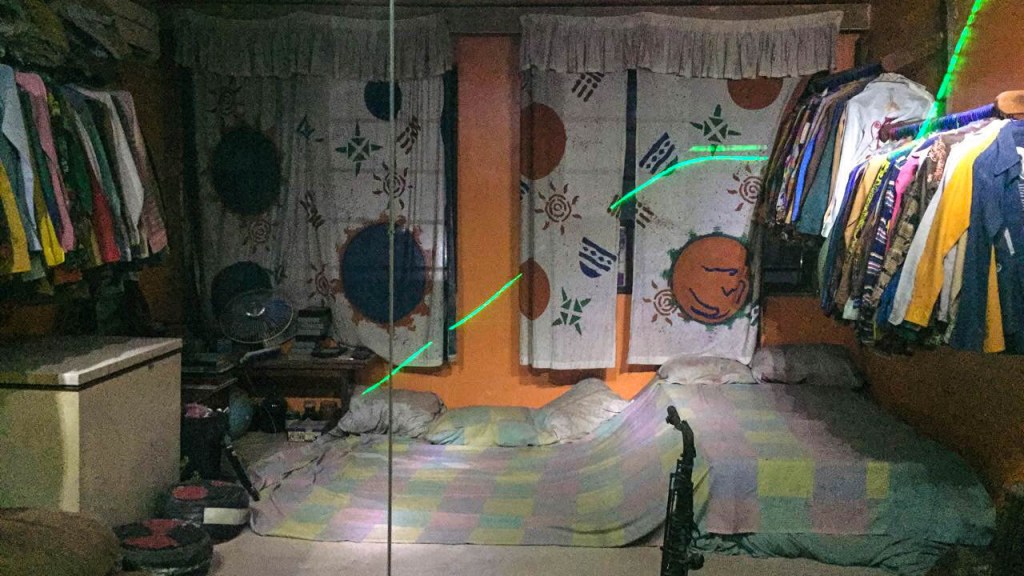 Next door is a collection of his shoes and you can definitely tell he was totally fashion forward as I’d still rock these shoes today if they were in good condition. 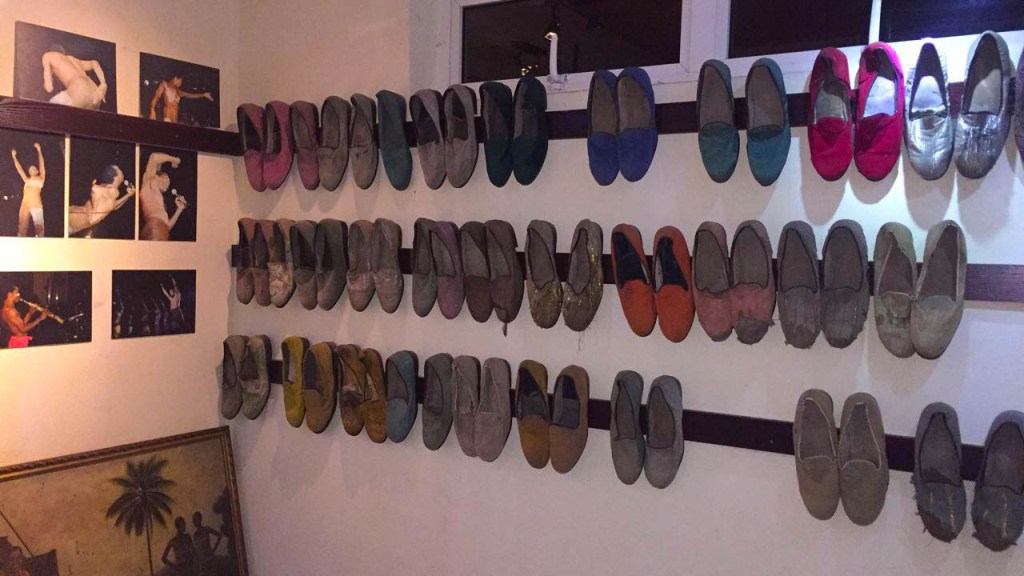 Fela was also known to wear just pants sometimes as apparel and a few of these were also on display together with his robe and other personal items. 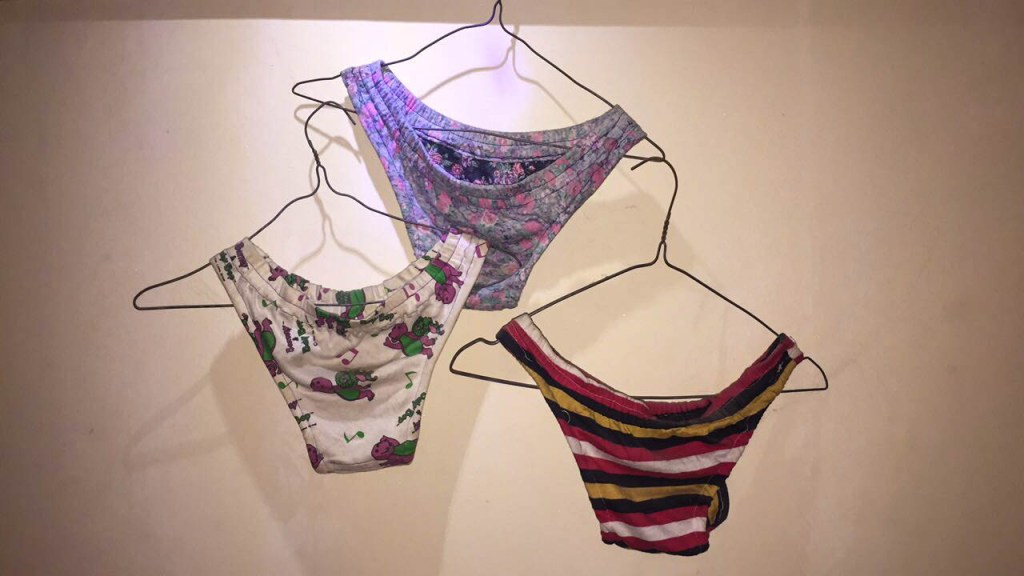 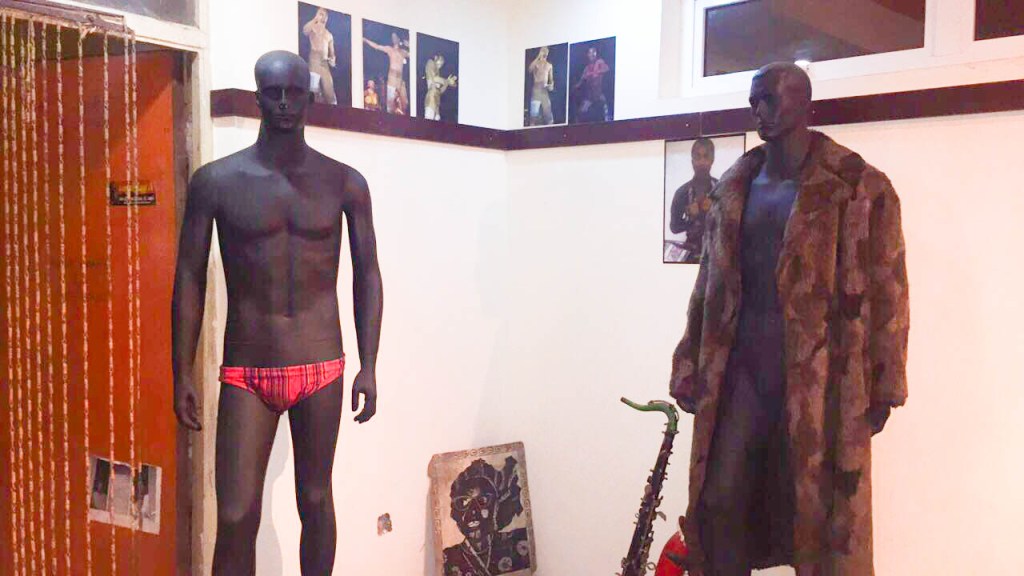 Fela being a human right activist and presidential aspirant was quite popular and graced the pages of the papers during his time clippings of which were also on display. 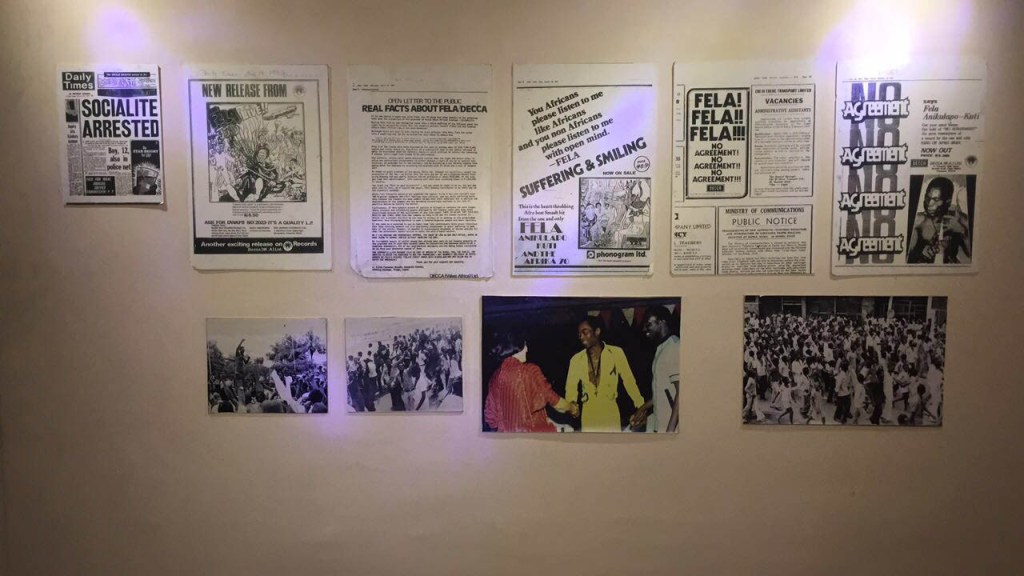 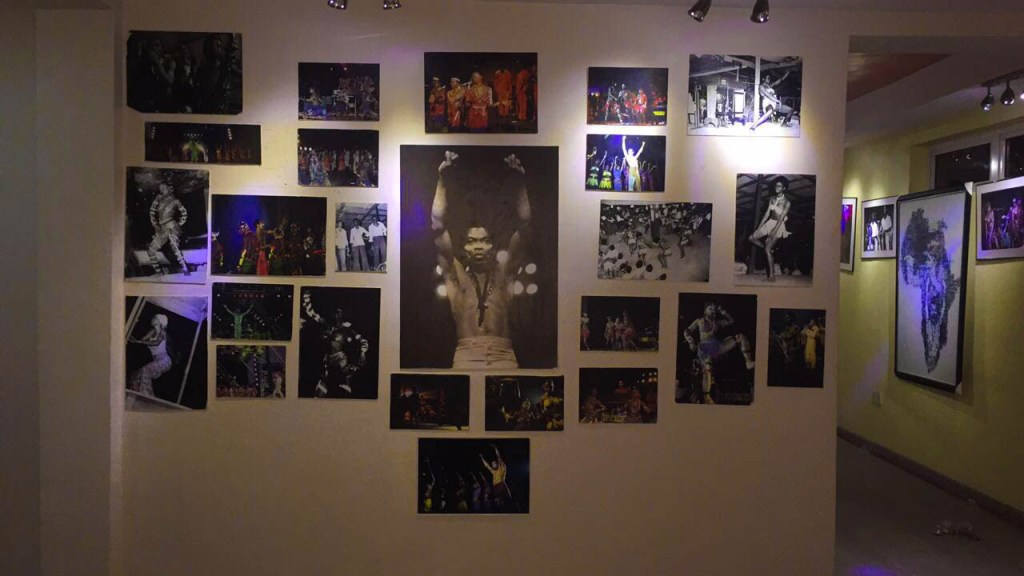 Further up is a terrace where drinks and peppered meats are being sold to visitors and although there are signs saying Smoking of Indian Hemp was not allowed, this was not strictly enforced. 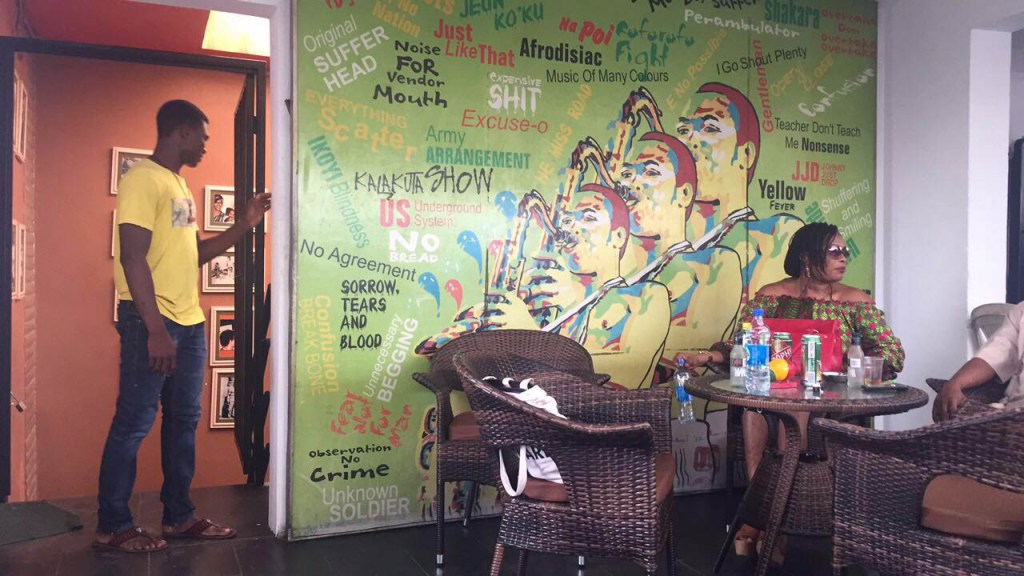 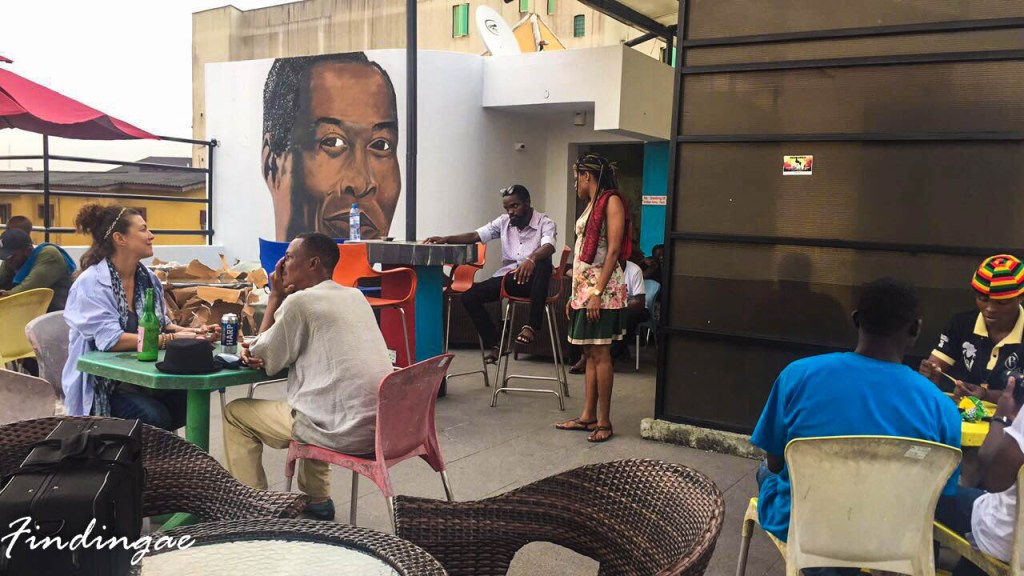 The ground floor of the Kalakuta museum has a souvenir shop with tee shirts, mugs and other Fela inspired gift items and certain painting inscription of popular lyrics in his songs. 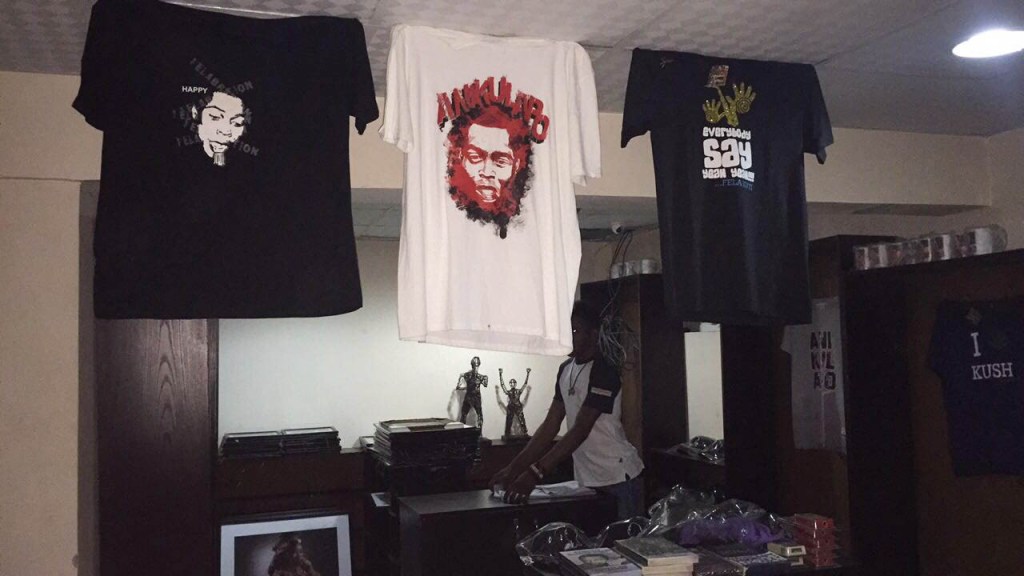 Lest I forget, there are also newly renovated rooms available for lodging if you are interested in spending a night at the museum. 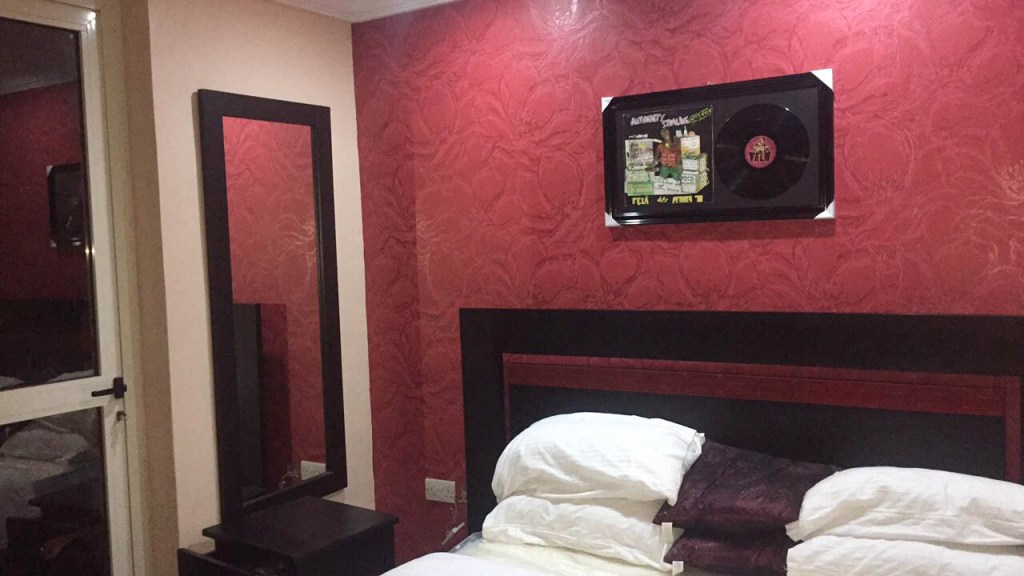 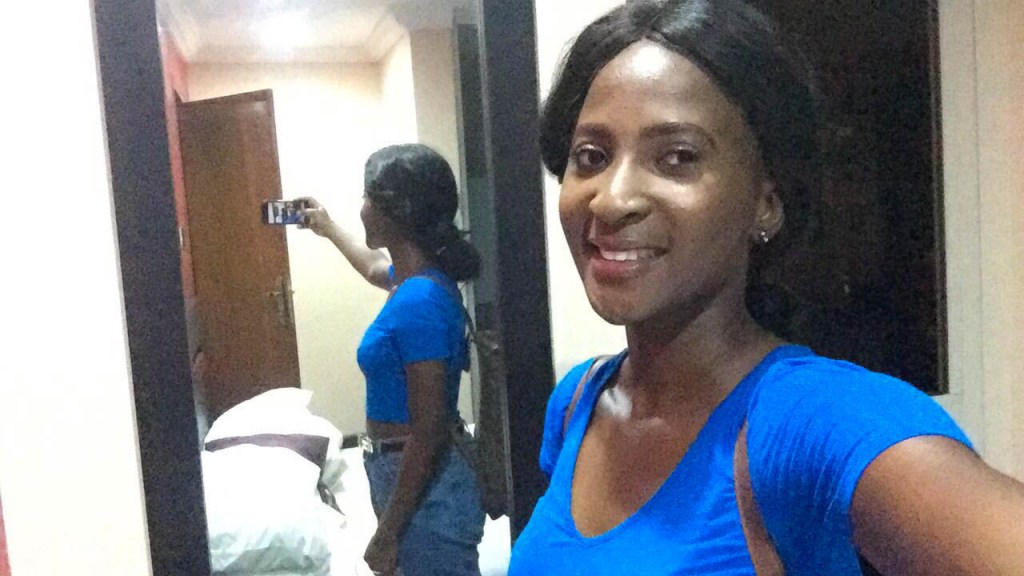 So guys, if you are a Fela fan, lover of arts and history or you just want a chilled evening with a drag. I’d totally recommend Kalakuta Museum. 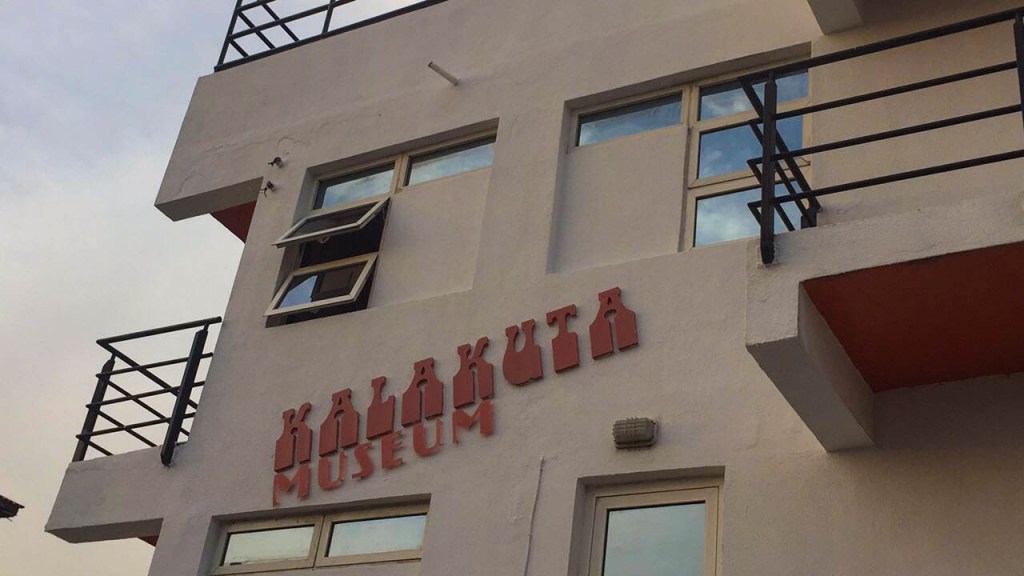 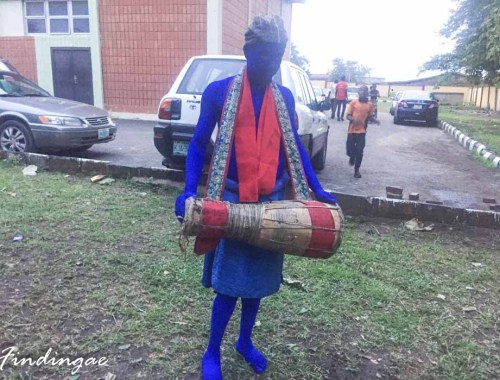 Against all odds – Learning to Swim better in Lagos, Nigeria 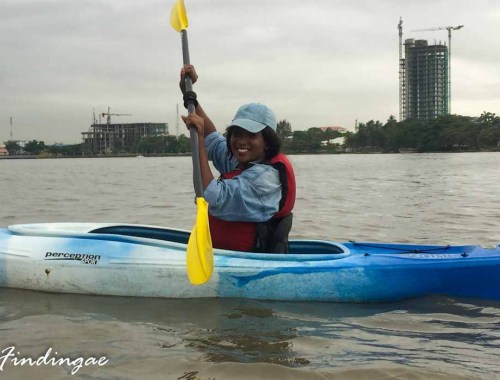 Kayaking in Lagos with my new Adventure Crew